The UK’s 10-point plan: scrabbling around the back of the sofa for cash

The announced 10-point plan for net zero carbon emissions for the UK is full of grand targets but is very short on implementation. The announced levels of expenditure do not stack up with the targets and there is very little in the way of solid programmes for implementation.

● Is this really meant to be a basis for determining how the energy supply industries will develop?

● Who is meant to pay to reach the targets, taxpayers or consumers?

Table 1 lists the ten points of the plan. The enormous gap relates to network development. Electric vehicles and heat pumps will absorb much of the additional generation, but all this energy needs to be moved. Network infrastructure investment is, therefore, crucial. We are certainly not the first to point out this glaring omission, but it is disappointing to see it ignored. It is also disappointing to see things like nature conservation listed but without a real plan for where those extra trees will go. Which wild parts of the UK is the government proposing to cover in fast-growing forests? 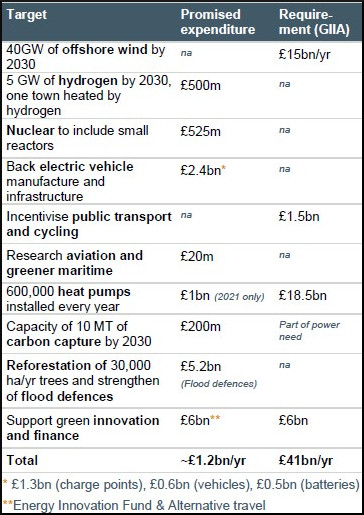 The targets and the budget: who is paying?

The £12 bn estimate of costs until 2030 is dwarfed by the requirement highlighted in the recent “Unlocking Capital for Net Zero Infrastructure” prepared for the GIIA by PwC; some of the values from this are shown in Table 1. The IPPR comes to similar conclusions on this lack of funds.

This leaves two sources of funding in addition to the taxpayer: consumers or investors. Investors will say thank you for any seed funds for research but the bulk of investment needs to be based on profit opportunities. Here, the assumptions seem to be missing. The only areas where profits may be offered without some form of consumer price hike arise from the innovation and finance area where the potential for subsidised credit from a green bank may be on offer; there is nothing definite about this other than the availability, in some way of £6 bn funds.

Consumers will bear most of the cost

Where non-government funding is available, this is largely through existing electricity subsidy mechanisms. The implication is that the gap between costs and funding will be dependent on electricity consumers paying to close it; unless, of course, more money can be conjured up from that Downing Street sofa.

Offshore wind and other renewables. The mechanism for this is well-established; it involves CfDs paid for by a levy on supplied electricity. Substantially expanding the volumes procured at each auction will raise the price of projects accepted, because more marginal projects will then be included.

Hydrogen. Other than some budget money and an aspiration, no mechanism has been announced. Conversion of residential and small business customer equipment is possibly catered for in this budget but a full regulatory process for this will be required. Network conversion to a full hydrogen supply is all or nothing for the affected area. Will this cost fall on gas consumers in the individual area or be socialised across all gas consumers or all energy consumers?

Nuclear. The money offered would seem enough to cover some research. However, deployment at scale is likely to require either a CfD arrangement as with renewables or a RAB model as is being discussed for large nuclear. In either case, the cost falls on electricity consumers.

Electric vehicles. Although money is offered to extend the charge point network and there is some money to subsidise battery production and vehicle price, consumers will pay for much of this. In particular, extra funds to build out charging networks in rural areas which are commercially unviable will also be needed – electricity networks will also need funds for reinforcement. This cost is likely, again, to fall on electricity consumers.

Homes and public buildings. There is a short-term boost to the scheme to allow energy efficiency measures and some unspecified subsidies may be offered for installing 600,000 heat pumps per year. But the resulting increase in electricity demand needs to be paid for and, again, electricity consumers are the obvious providers.

And what about the aspirations without apparent finance?

There seems no funding or means of achieving the aspirations for:

• Aviation and greener maritime. A bit of research but no other way of implementing

• Nature. Having failed previously, this seems to be an unfunded hope that 30,000 hectares of trees will be planted every year.

These are good aspirations but the means are lacking

Much of the Prime Minister’s speech seemed to be about the creation of green jobs and this may have driven spending priorities. But these jobs will still need to be paid for and it seems that the main payers will be energy consumers.

The gap between aspiration and realisation shows no real sign of being bridged. It is hard to resist the conclusion that this is a wishlist with no serious plan for how it is to be delivered. The Government must look hard for that spare change if these dreams are to be turned into anything approach reality. 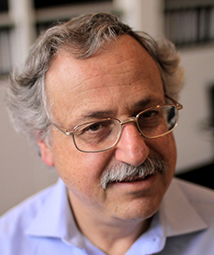 Rob has worked on design of electricity, gas and renewables markets and has advised on processes and costs in the UK and a number of other countries. He has worked for governments, regulators, system operators and private clients in all these areas.

To contact Rob directly please email or connect with him on Linkedin below.