Changing European gas markets – are established suppliers lagging behind or setting the tone?

Last month French power utility Engie announced that its long term gas contracts with Gazprom would be linked to international gas prices, replacing oil price indexation. This comes at the same time that Norway allowed a 10% increase in production from the Troll gas field to maintain market share in Europe2. With increasing competitive pressures from more diverse, short term and low cost sources in Europe, are new suppliers shaping the gas market?

Estimates of Gazprom’s delivered cost of gas to Europe over the last year suggest that  spot prices on European gas hubs have been below Russian gas prices. This is despite developments supporting the competitiveness of Russian gas3.

With a continuing trend of falling (or stabilising) gas prices in Europe and limited capacity to reduce prices further, one might expect Gazprom to be facing significant financial difficulties and losses in market share on European markets in the short to medium term.

To remain competitive, Gazprom has however increasingly pegged its contracts to

European (or international) gas hub prices. A strategy already applied since 2010, but so far only for shares of contract volumes. This has resulted in a record volume of gas exports to Europe over the past year. In a stable if not shrinking market and facing price pressure, this demonstrates more flexibility than one would expect from a large state owned gas monopolist.

Norwegian’s Statoil has demonstrated contract flexibility considerably earlier than Gazprom. This was no doubt triggered by its higher cost of gas supply and its efforts to increase market share in Europe since the early 2000’s. Statoil is providing uncontracted short term pipeline supply to European hubs, as well as introducing hub3 eg devaluation of the Rouble, reduction of export duties and  mineral  production taxes).   4 Source: Gazprom, EEGAS, FAS, TSOs based prices in its long term contracts. Estimates suggest that 50% of its contract volume in Europe is gas spot price linked. In 2015, Statoil has also exported a record volume of gas to Europe underlining its successful strategy.

Despite low cost, US LNG unlikely to act as ‘market mover’

Further commercial pressure on the established gas suppliers will come from an increasingly liquid and lower cost LNG market. Analysis suggests that US LNG cargoes are likely to be priced at marginal cost in Europe, as liquefaction costs are sunk5. At current Henry Hub prices, this could be in the range of 1.4 to

Trading on Europe’s gas markets can largely be split in OTC (bilateral) trading and spot market (exchange) trading. The degree of exchange trades compared to OTC trades signals the willingness of market participants to engage in short term trades and the liquidity of the markets. Across all European hubs, only 15% of gas is traded through exchange trading. 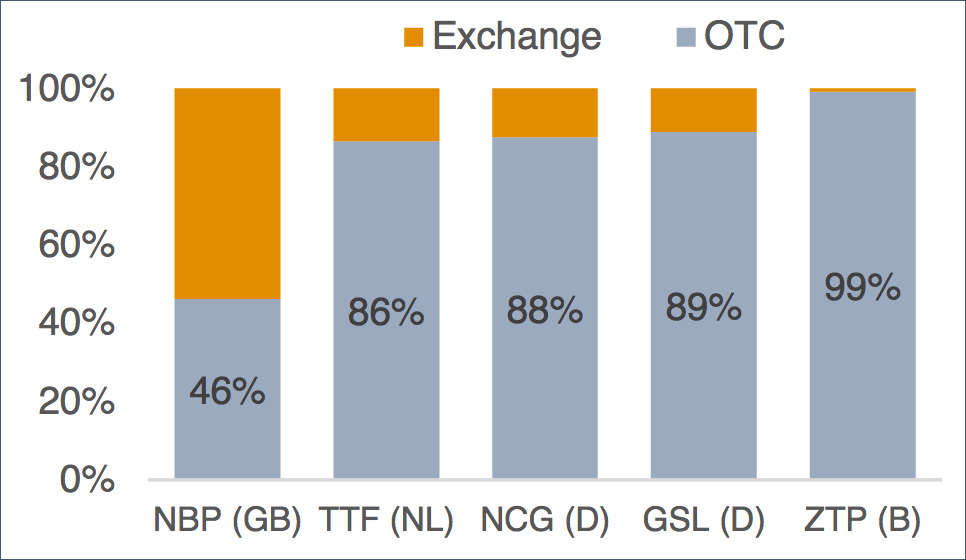 Additionally the share of LNG spot cargoes sold to Europe fell considerably over the period 2010 to 2014 from 21% of Europe’s LNG imports to 8% in 2014. A lack of liquidity and trading preferences in Europe are the main reasons for this development.

Competition between established suppliers will shift the market – not new entrants.

Any move towards short term, gas hub based trading in Europe will largely depend on the liquidity on spot gas markets, which only the large established suppliers can provide. With customers less willing to enter into long-term arrangements in a competitive supply-side market, established suppliers will need to increasingly move towards more flexible, shorter term and hub based pricing arrangements. This provides exactly the required liquidity for spot trading to develop. So, rather than external new suppliers directly dictating the way the market is developing in Europe, it is largely the established suppliers that will set the tone, albeit with a reduced scope of dictating contract terms.

5 Europe seen as major market for US LNG, Oil Voice, 6 May 2016
6 ECA calculations on basis of gas pricing model
7 Source: OIES, Do we have aligned and reliable gas exchange prices in Europe, April 2016