Russia’s halting of the South Stream gas pipeline has led to speculation of a new gas hub at the Turkish-Greek border. Such proclamations are premature due not only to commercial difficulties with an alternative Black Sea pipeline, but also the one-directional flow at the border, the lack of competition in gas trading in Turkey and the limited storage capacity in the country.

On 1st December, Russia announced a halt of the South Stream gas pipeline project and is instead planning to redirect 45 Billion cubic metres (Bcm) of gas to Turkey via a new pipeline through the Black Sea, sparking speculation about a new gas hub at the Turkish-Greek border. However, any true free- trading hub requires competitive pricing, a feature unlikely to develop in a monopolistic Turkish wholesale market with predominantly one-directional border flow to Greece.

It is not clear whether South Stream is indefinitely closed or whether this announcement is a temporary tactical response to the tensions between the EU and Russia over events in Ukraine.

Besides the EU’s opposition to the project and Bulgaria’s lack of cooperation over recent months, the contributing factors to the decision are likely to be the high costs and uncertain benefits of South Stream, as well as Russia’s financial difficulties triggered by low current oil prices. As these circumstances change however, Russia’s view on developing South Stream, and with it Turkey’s prospect of becoming a gas hub, may also change.

Rerouting to Turkey is commercially more questionable than South Stream

Redirecting the 45 Bcm – and eventually 63 Bcm- initially intended to land in Bulgaria to Turkey is commercially questionable. The cost of the new pipeline could be as high, if not higher, than South Stream. Also when factoring in transmission costs in Turkey for onward export to Europe, as well as competing low cost Azeri gas, Russian gas will have to be priced very competitively. With (potentially) higher pipeline development costs and lower gas prices, the second Black Sea pipeline to Turkey appears a financially unattractive project. 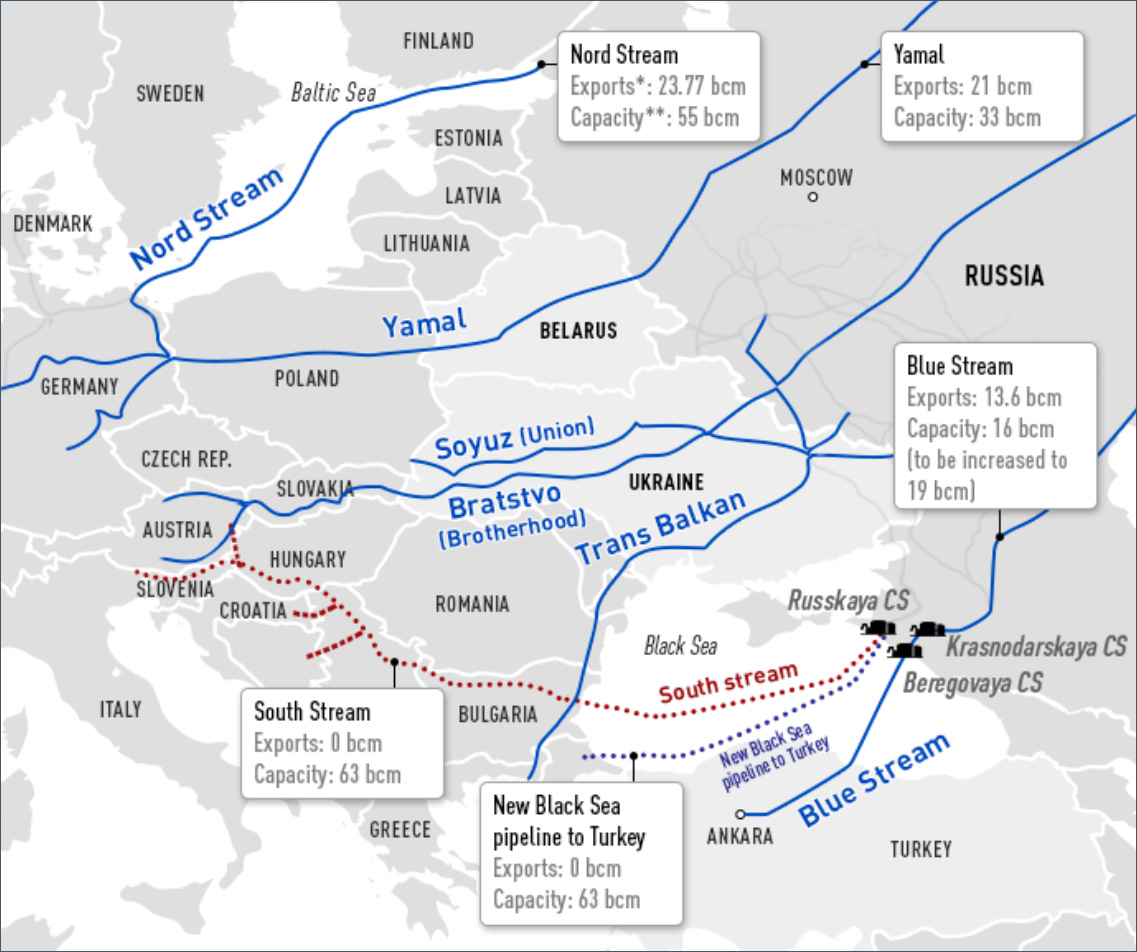 Flow across Turkish-Greek border would predominantly remain one directional

A gas hub is a free-trading competitive gas marketplace where prices are formed on the basis of supply and demand conditions. Physical flows into and out of the gas hub are essential for a market reflective price to develop. Even if the 45 Bcm were to land in Turkey, it is doubtful that such a hub can be established on the Turkish-Greek border. Flows at that point are predominantly in one direction – into Europe. This would make the proposed gas hub at the border not so much of a marketplace for the active trading of gas, but instead a gas pooling point where Turkey’s supply sources are pooled and sold onward to Europe. Turkey’s dominant wholesale trader, BOTAS, will be able to extract the maximum rent defined by the difference in European gas prices and the weighted average cost of gas resulting from its diversified supply mix.

If BOTAS remains the main gas trader in Turkey, a hub is unlikely to develop

State-owned BOTAS currently dominates the wholesale market and controls over 95% of gas imports in Turkey. For a real market to develop, however, wholesale competition must be introduced. This has been a key energy policy objective by the Turkish government for a long time, but has not materialised. Competition would enable private gas and electricity market players to have their own import contracts, trading their gas imbalances through the hub and reaching market reflective prices. However it is doubtful whether this is what the government has in mind when mentioning the possibility of a hub, as it would weaken BOTAS’s position.

Gas contracts into and out of Turkey are likely to continue to be based on long-term contracts. This restricts competitive trading and would make Turkey a key transit country, but not a gas hub. A considerably higher degree of flexibility in terms of volumes, prices, destination market and onward sales would have to be provided in cross- border gas trade around Turkey for the emergence of a real trading hub.

Turkey only has limited storage capacity, which is estimated at 5% of 2013 annual demand. This is a major limitation for the development of a gas hub, as trade is facilitated by the ability to store gas and retrieve it when commercial arbitrage opportunities arise. Turkey’s potential to expand its storage capacity is small, hence there is no prospect for large-scale future increases in available volumes.

Scrapping South Stream and diverting supply to Turkey will, on its own, be insufficient for the development of a true free-trading gas hub. Aside from the commercial difficulty of a second Black Sea pipeline to Turkey, substantial further barriers exist in the form of predominantly one directional flows on the Turkish-Greek border, the lack of competition in gas trading in Turkey, the lack of flexibility of gas contracts and limited storage capacity with no prospect of major expansion. These factors are likely to remain unfavourable, preventing the development of a Turkish gas trading hub in the foreseeable future. Rather Turkey’s role will be one of a key gas transit country for Caspian and Russian gas directed to Europe.