Capex bias: a window to the soul of the incentive regime

In this commentary we share our views on Ofwat’s May 2011 discussion paper on capex bias, explaining why it opens up an opportunity for a change in direction for the UK water sector’s incentive regime towards top-down, strategic, powerful incentives.

Ofwat’s May 2011 discussion paper on capex bias asks whether it exists and whether it is a problem.

But the subject goes right to the core of the incentive regime that we have had for the last twenty years; and Ofwat’s paper opens up an opportunity to redirect the path of regulation for the next twenty.

At stake is whether regulation can evolve towards top-down, strategic, powerful incentives.

What does Ofwat’s paper find?

It finds the issue is complex.

It highlights the effects of interactions between incentive mechanisms, review processes and different types of expenditure. Some circumstances might generate a capex bias while others might generate an opex bias. Its discussion of the wider drivers of bias notes that combinations of factors make it difficult to reach clear conclusions and that Ofwat’s processes, such as its challenges to capex programmes, may help mitigate any bias.

It would be easy to conclude that it looks like a mixed bag of different influences with some second order distortions but no compelling evidence for systematic bias one way or the other. We explain in this note why we believe this conclusion to be wrong.

The water regime has evolved over the past couple of decades from the RPI-X concept originally designed without any reference to a regulatory asset base (1).

It has been added to and refined over the years, trying to resolve incentive distortions. Over this time, the analytical model has also developed significantly and there is now more recognition that the regime has to operate in an environment of complex influences, from processes and mechanisms to culture and governance. So it would not be surprising if distortions remain.

Ofwat sets out a list of potential causes of capex bias. It is a useful and well thought-through list. However, and perhaps understandably, Ofwat frames its commentary in neutral terms.

Return on capex, no return on opex

Ofwat notes the view of some companies that, as capex is remunerated through the RCV and earns a return while opex is remunerated on a current basis, earning no such return, there is a strong incentive towards capex.

Classical economic analysis would say this should not be a problem if the allowed return were to equal the cost of capital – an investor should then be indifferent to the form of remuneration. However, Ofwat notes that the need for it to ‘aim up’ (2) on the cost of capital assessment may create an incentive for more capital intensive solutions.

While this may be the case, we believe the issue is bigger and more complex.

A central contention of finance theory is that the cost of capital and risk are related. CAPM is based on the insight that the pertinent risk for investors able to diversify is systematic risk, risk that affects the generality of businesses. The cost of capital for a project, at the project level, is driven by the effect the project has on investors’ exposure to systematic risk.

Investor risk intrinsically relates to uncertainty in future cash flows. Our analysis of the drivers of cash flow uncertainty in a regulated business suggests that the main sources of systematic risk are likely to be in opex markets and in periodic review processes (3) (challenging the intuition of many economists). For example, increases in the real market price of labour or energy, say, will affect a regulated business in the same way as it would the generality of businesses, and possibly more so (4).  Similarly, it may be presentationally difficult for a regulator to resist a lower cost of capital assessment if investors in the generality of businesses are experiencing a period of relatively low returns.

But only some of that risk is driven directly by the size of the RCV. Relatively capital intensive projects, with low or negative incremental impacts on opex cash flows, will tend to dilute systematic risk. Projects with significant opex components could disproportionately increase exposure to systematic risk. This could have a significant bearing on investment choices and capex bias.

Although Ofwat notes that the relative efficiency regime has a bearing on capex bias, its analysis focuses narrowly on companies’ choices when there are opportunities for outperformance or risk of underperformance in either opex or capex. Ofwat’s analysis suggests a capex bias can exist in some circumstances.

However, we consider the more important effect is on companies’ strategic choices; well before outperformance incentives come in to play.

Investors need to be confident that incremental expenditure associated with a project, whether capital or operating, can be fully recovered. They do not need a guarantee as long as the risk of loss is at least balanced by the opportunity for gain.

For capex, integrity of the RCV is now so well established a principle that investors can have real confidence that they will receive a return on and of their  investment. Whether that is an adequate return remains a concern, but the mechanism itself is a source of confidence.

For opex, where efficiency is easier for Ofwat to assess, an investor’s calculation is affected by Ofwat’s assessment of relative efficiency.  Incremental opex will be fully remunerated if there is a corresponding increase in Ofwat’s explanatory factors or if all companies are subject to the same increase.  An individual company would have an incentive to structure its projects to have maximum impact on explanatory factors and minimum impact on opex, whether or not other companies are doing the same.

In this way, the whole industry might be impelled towards lower opex solutions.

Evidence from performance and CIS

Return on capital and the relative efficiency regime point to the likelihood that the bigger incentive issues may relate to strategy at the project, company and sector level rather than post-review outperformance.

In fact, post-review performance over AMP4 was surprisingly balanced (5), with results ranging across companies from – 15% (outperformance) to +15% for capex and -10% to +8% for opex, with a small aggregate industry outperformance in both capex and opex.

The introduction of the capital expenditure incentive scheme (CIS) mechanism for capex in PR09 provides some interesting insights. The mechanism was meant to provide strong incentives for companies to ‘bid’ for levels of capex that they could achieve, and the AMP4 experience might have led us to expect overall CIS ratios to be close to 100%. However, final CIS ratios (6) were significantly skewed up, ranging from 93% to 143% and averaging out at 107%.

Perhaps Ofwat’s baseline assessments were more challenging in PR09 than PR04, or perhaps the scheme could not  overcome a natural cautiousness in company costings. However, the chart below illustrates the point that there could be more value in influencing Ofwat’s assessment than in outperforming  it. 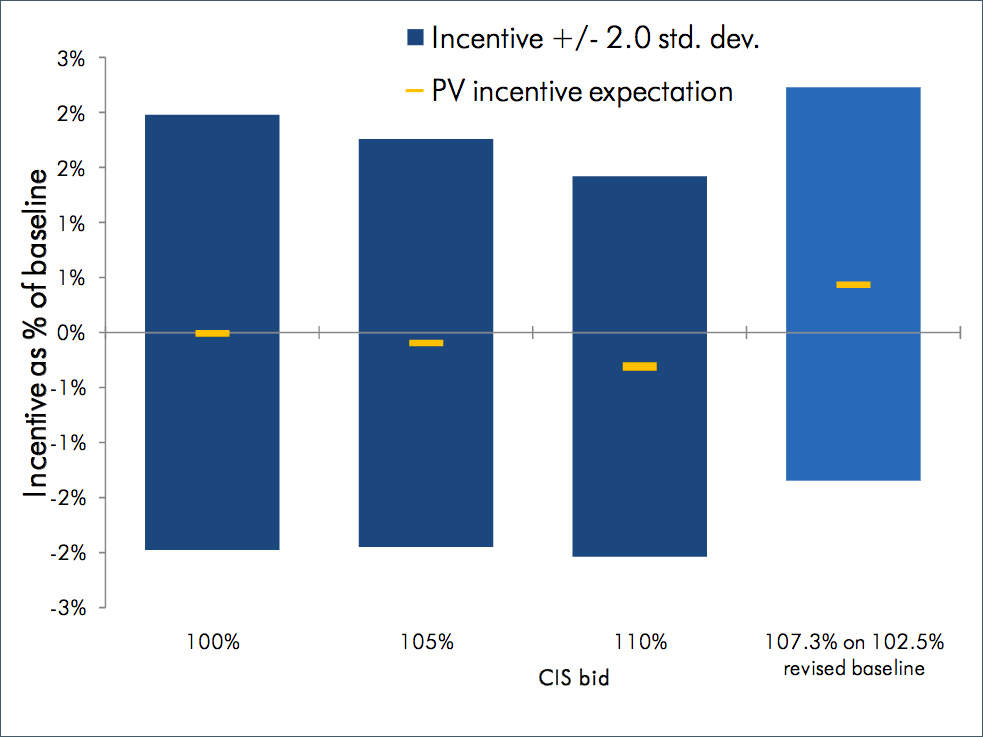 The three columns to the left illustrate the range of returns (± 2 st. dev., as a % of original baseline) from an uncertain capital programme and a fixed baseline – the expected return (y-axis) is maximised if the company’s bid equals its expected capex spend (1st column). The fourth column shows the same programme and the result of bidding at 110% of expected capex spend if that leads to a small increase of 2½% in Ofwat’s baseline assessment: the expected return is somewhat enhanced.

The CIS was a step in the right direction, but not enough to incentivise game- changing approaches to capex.

“Substantial value for customers will depend on powerful, well-directed incentives for investors”

These issues are central to the ability of the regime to encourage longer term benefits for consumers. Ofwat sets out a number of possible ways that might help resolve capex bias, and we believe the most interesting options lie in ‘outcome- based’ thinking.

As Ofwat recognised, outcome-based incentives would not by themselves solve biases that arise from the processes for determining revenue requirements.

Those processes are structured around the accounting concepts of capital and operating costs, a distinction which is relevant for incentives since the quality of revealed information is different: a reduction in opex in one year often reveals an ability to keep it at that reduced level  in future years (other things being equal) while the same is not usually true of  capex. Short-term totex-based incentives would be problematic.

The distinction was most useful in the period immediately after privatisation, when the transition to commercially- driven, incentivised business cultures meant that big savings could be made. That transition is now substantially complete. Now, the simplifying assumptions behind the incentive model may be starting to get in the way.

ECA’s analysis of incentive regimes starts with the premise that a good incentive regime aligns the interests of suppliers  and customers and that revealed information about potential performance improvement is valuable, irrespective of when in the regulatory cycle it is revealed.

Risk-based modelling techniques can be helpful in analysing the incentive properties of complex systems, understanding their dynamics and informing regime design.

For a simple illustration, the chart below shows the results of a 100-scenario incentive analysis of the rolling incentive mechanism introduced by MD191 in PR04. 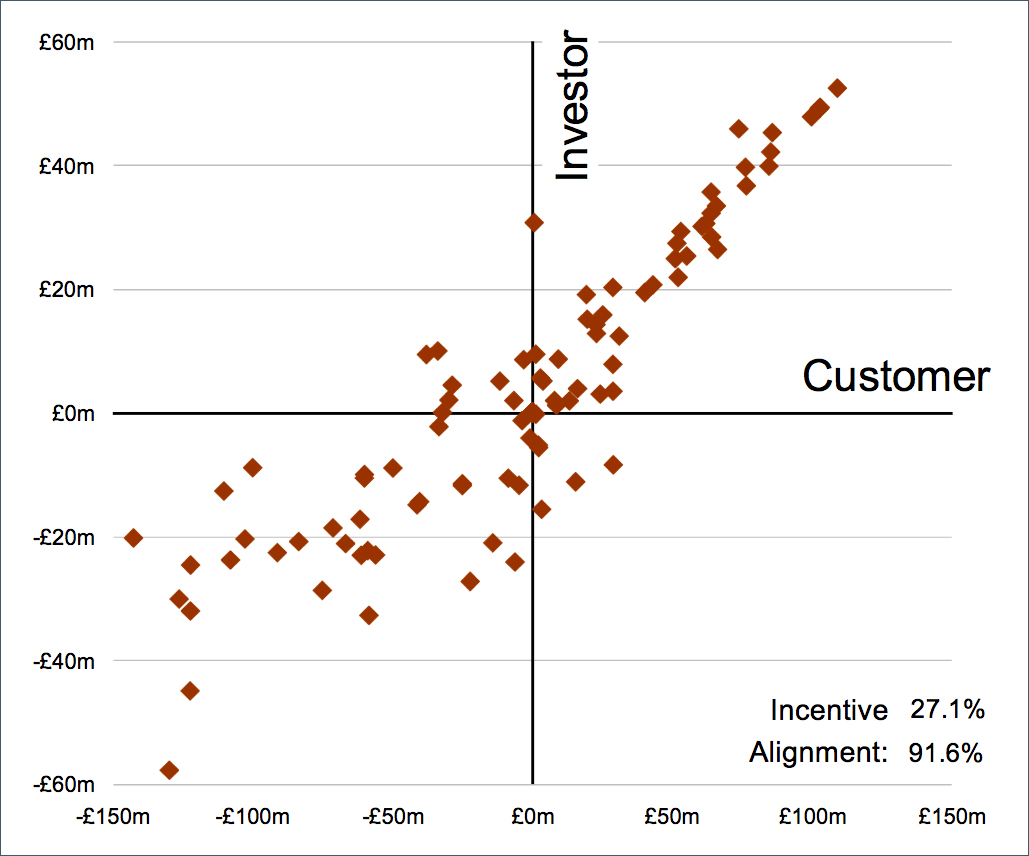 It shows that, taken in isolation, the mechanism provides good alignment for strong outperformance scenarios (top right quadrant of the chart) but some alignment issues for other scenarios. Investigating why the mechanism is not working so well in outlying scenarios helps identify the causes of misalignments and informs incentive design.

These techniques are especially powerful when analysing regimes as a whole. The chart below illustrates high-level results of such analysis (in another sector). 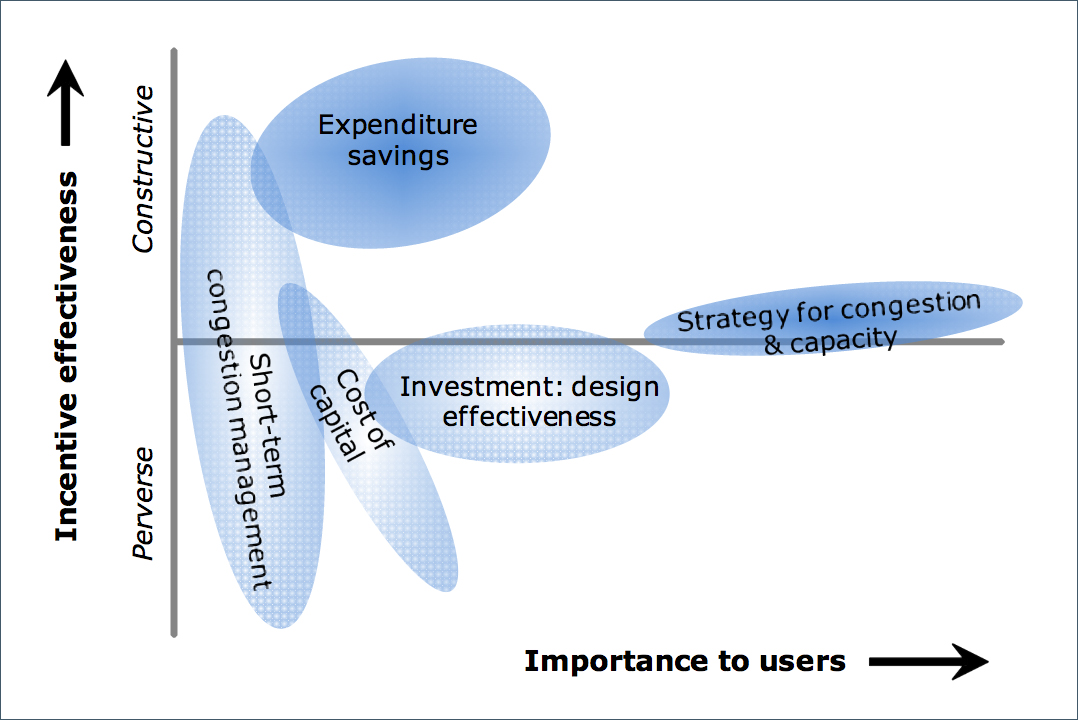 The heart of the matter

As the sector matures under the current regime, we can expect efficiency analysis to show diminishing returns and methodological constraints to become more apparent.  The question of capex bias looks into the inner workings of the regime, but it also opens up some of these fundamental design issues and highlights the need for a bigger-picture perspective.

Our approach is towards evolutionary rather than revolutionary change, but a redirected evolution towards powerful, simply-understood incentives for real long-term  benefits  for consumers.

The next twenty years could be exciting.

1 Michael Beesley & Stephen Littlechild, ‘Privatization: principles, problems and priorities’, Lloyds Bank Review, 1983
2 It is generally recognised that there is asymmetric risk between setting the allowed return too low, deterring vital investment, and setting it slightly too high. Regulators, therefore, tend to err on the side of caution by selecting values towards the upper end of the estimated range for the cost of capital.
3 Revenue uncertainty within-period is largely neutralised by the revenue correction mechanism; service performance mechanisms would not have a strong systematic component; the Competition Commission report on Bristol Water (para. N130) considered that capex cash flow uncertainty is unlikely to be a source of positive systematic risk.
4 Because regulated revenues are not as responsive as market prices to changes in underlying costs.
5 FPE 2009-10 supplementary information
6 Final determinations report