Cities and municipalities at the forefront of the energy transition

Chile was an exemplar to the world in its introduction of liberalised power markets in the 1980s, even before the UK. It is now part of a broader global trend in the localisation of climate policy-making. Reflecting the drive by the Covenant of Mayors in Europe and the Conference of Mayors in the US, Chile’s “Comuna Energética” programme offers an example of how regional and local government can spearhead change.

How do cities and municipalities drive the energy transition?

Local authorities throughout Europe are implementing innovative business models for the promotion of renewable energy and energy efficiency (RE/EE) to deliver energy transition at a local scale. For example, throughout the EU municipalities are taking a lead role in implementing EE measures through energy service companies (ESCOs). This builds on long tradition of local involvement in sustainable energy initiatives stemming back to communities driving the early adoption of wind in Denmark through a cooperative scheme promoted by the national government.

The Covenant of Mayors, started in Europe in 2008, is now the world’s largest movement for local climate and energy actions, gathering almost 10,000 local and regional authorities across 59 countries and spanning activities from power generation to heating and cooling, transport, and waste (Figure 1). In the United States, in response to the country’s withdrawal from the Paris Agreement, the US Conference of Mayors (representing more than 1,400 cities) adopted a resolution in support of 100% RE.

A wide variety of business models are used to drive decentralised and bottom-up energy transition, and different roles that local authorities can play. In a first stage of market development, municipalities can act as “market creators”, financing RE/EE projects in their own facilities (e.g. schools, hospitals, public lighting, district heating, etc.) and through their own budget. Revolving funds are also an option to fund a larger number of projects on a continued basis. As the market develops, more commercial financing options are used, such as enabling ESCOs and energy cooperatives (see Figure 2).

Initiated in 2015 by the national government, the “Comuna Energética” programme provides municipalities with management tools and support for them to develop RE/EE strategies and implement projects at the local scale. The programme includes an accreditation process as well as a platform for experience sharing among municipalities.

At the time ECA was involved in a study of this programme in 2018, it had 47 participating municipalities and actively engaged the private sector and civil society in the planning, financing and implementation of projects.

Some of the projects implemented to date had included EE measures in public facilities (such as municipal schools and hospitals), leasing of rooftop solar PV systems in residential neighbourhoods and ESCOs to deliver RE and EE to both institutional and residential customers.

Figure 1 Signatories to the Covenant of Mayors 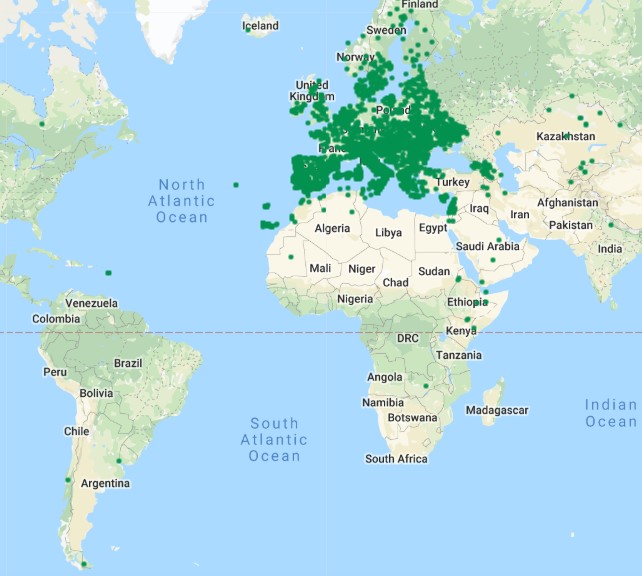 Local governments have used their direct regulatory and purchasing authority to shape the energy transition. Some cities are able to accomplish more ambitious RE/EE goals than national governments, as cities have strengths such as their direct responsibility for providing infrastructure and services to residents (e.g., energy, transport, housing, waste collection and wastewater treatment), their contractual relationships with energy providers and large-scale users, and their authority to create incentives that drive the energy choices of citizens and businesses at the local level.
The options available to municipalities and communities are however conditioned by national or regional frameworks and the extent of devolved authority. For example, the implementation of the EU climate and energy policy objectives entails a transition to clean energy which, to some extent, will require decentralisation of the energy system.

Could this trend continue round the world?

Decentralisation and local ownership of energy is driven by cultural and social dynamics as much as economics. Trends toward regional devolution, decentralisation of government to local authorities, and participative governance, are taking place across the EU (and internationally) and will perhaps be one of the main drivers toward local participation in energy systems.

The successful uptake of the local energy ownership models depends upon a clear political commitment to energy transition and stable policies for the development of RE/EE at all governance levels, a legal framework governing local energy communities, and, ideally, financial incentives and support.

The case of Chile provides an example where these elements are provided by the national government, encouraging municipalities to take ownership of their energy transition. This trend has started to spread within Latin America, with the governments of Uruguay and Colombia, among others, replicating similar programmes. Devolved powers allow mayors and councils to move ahead of national governments.

Cities in other countries worldwide can also participate in this trend. Where national governments provide a sufficient degree of devolution and decentralisation, cities can benefit from partnerships such as the growing Global Covenant of Mayors, providing support and sharing lessons learned, and help address, if not accelerate, their countries’ energy transition ■

About ECA’s involvement in “Comuna Energética”