The closure of GB’s largest gas storage facility (Rough) led to concerns among market observers and participants of supply shortages and increased GB gas price volatility. This insight explores what sources replaced the supply gap left by Rough (and higher demand) and their impact on price volatility. We find that domestic production and increased EU imports – not LNG – filled the gap. While this does increase GB’s price exposure to the EU market but not necessarily its price volatility – pending future EU-GB gas trade arrangements.

The Rough gas storage facility – the largest in the UK – is expected to close over the next year. The operator, Centrica, cited both safety concerns as well as economic infeasibility as the primary reasons for a closure of Rough [1]. 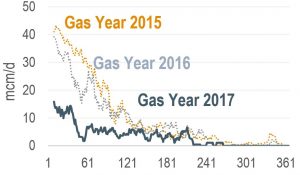 UK supply data shows that the facility was already used markedly less in the gas year 2017 [3] than in the gas years 2016 and 2015. Figure 1 shows 10-day average withdrawal rates over the past three years ordered from highest gas supply day to lowest.

The supply gap left by Rough has mainly been filled by increased domestic production, EU imports through the interconnectors BBL and IUK and higher Norwegian imports. 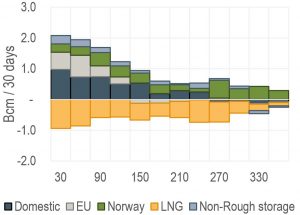 Together these sources were sufficient to cover Rough’s supply gap and more. Demand rose by 5.1% from 2016 to 2017 and LNG supplies fell. Figure 2 shows the change in supply by source from one year to the next. The flexibility of domestic production to respond to tighter market conditions may have been overlooked by those fearing supply disruptions from Rough’s closure. This demonstrates that the UK’s supply situation is robust.

Even under extreme conditions, security of supply is ensured

Turning to the current gas year similar trends of supply mix can be observed so far with EU imports increasing from last year. This winter has been an even tougher test for the supply security of the GB gas market due to: (i) sustained lower temperatures in Europe, (ii) supply disruptions in continental Europe following a fire at the Baumgarten hub in Austria in December 2017 and (iii) the closure of one of the main hydrocarbon supply pipelines from the North Sea. This underlines the sufficiently diverse supply conditions on the GB market in the absence – or lower usage – of Rough.

Such a significant shift in supply structure and greater reliance on imports was widely expected to increase price volatility at GB’s National Balancing Point (NBP). However there is little evidence for this: as Rough withdrawal rates fell, prices did not become uncharacteristically more volatile [4]. One significant contributing factor is likely to be that Rough’s supply gap was not filled by LNG spot cargoes but stable priced domestic production, EU and Norwegian imports. 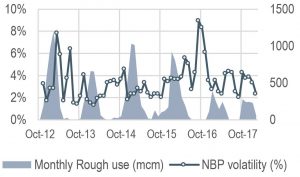 The announced closure of Rough and resulting lower withdrawal rates seem to have been absorbed well by the GB gas market. However the greater reliance on EU spot imports does suggest that there is exposure for the GB market to European gas market developments and therefore any future gas trading arrangements between the GB and the EU. This in and of itself does not mean greater price volatility – instead it suggests that an even closer price convergence of NBP with European prices may be observed.

[2] 10-day moving average based on data from National Grid

[4] We calculate gas price volatility as per the European Commission guidelines of historical volatility: monthly average standard deviations based on daily log changes.