In many developing countries, those who have piped water into their homes are a privileged elite. Not only is the quality of service much higher, they pay considerably less per cubic meter that low income households whose family members have to collect water in buckets and jerrycans from a variety of sources, not all of which are safe. Governments and donors supporting the sector require water utilities to subsidise the wholesale cost of water destined for such households, but the retail price they actually pay is anything up to ten times that of piped water. Based on work that ECA has carried out in a number of African countries, this note proposes a new alternative for supplying low income households with clean water.

The scale of the problem

In sub-Saharan Africa (SSA), only a small proportion of the urban population has piped water into their homes, but this varies across income categories from 5% at the bottom to 62% for the richest households. In rural areas, hardly any families at all have piped water. The overwhelming majority in SSA carry water every day, women and girls doing almost all of this daily, arduous work. 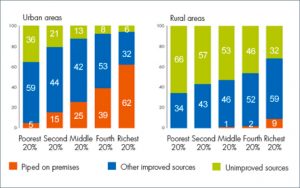 To ensure that urban households are able to collect safe water reasonably close to where they live, the solution that is  offered in many SSA countries is a system of water kiosks, which are locations where people can pay to fill up buckets and jerry cans. The kiosks may be run by public entities, such as municipal water and sanitation departments or publicly owned water utilities, or by community groups or by the private sector.

Whatever the ownership structure, it is common for the wholesale price of water to be supplied to the kiosk at a subsidised price. This is in recognition of the fact that the overwhelming majority of the customers of kiosks are low income households who deserve to have access to clean water at an affordable price.

The reality, however, is that kiosks are inherently costly to run. Labour costs, particularly the wages of the kiosk minder who accepts payment and supervises the drawing of water by customers, constitute a large proportion of the running costs.

Even in public and community kiosks, the result very often is that the cost per cubic meter of water collected from kiosks is at least twice the cost of water for households which have piped water into their homes. This disparity may be due in part to the under-pricing of piped water for domestic customers of the water supplier, but even if these tariffs are cost reflective, the effective price for kiosk customers is likely to be significantly higher than piped water customers, notwithstanding the subsidisation of the wholesale supply price to the kiosks.

In cases (such as Kampala, Uganda) where the kiosks are privately owned and operated, the kiosk owners may charge up to ten times the price of piped water into people’s homes. In such cases, the subsidy intended for the poor is appropriated instead the private operators.

In even the best run community kiosk systems, kiosks are failing to deliver sufficient clean water at an affordable price to the users. Marginal improvements in kiosk operations will never be sufficient to dramatically alter this situation – what is needed is a radical new approach.

Drawing on the successful experience of cities such as Kampala and Windhoek, prepayment meter stand-posts offer just such a radical alternative. The following advantages can be cited:

Capital costs of PPM standposts are much lower than conventional

In one of our study sites, we estimated that twice as many customers could be served for the same investment cost. It seemed likely that monthly expenditure on water per household would not change, allowing consumption to double from 25 to 50 litres per capita per day.